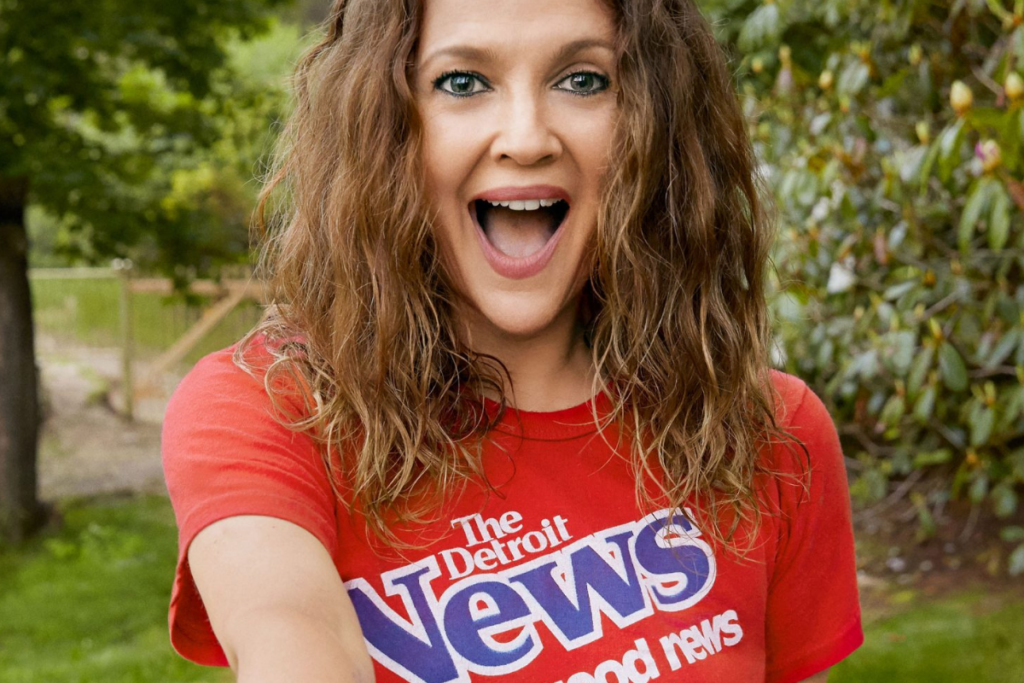 July 8 was a regular morning, just like any other Wednesday. The newsstands featured the daily papers and monthly magazines, including the August issue of InStyle that was hot off the press and featured Drew Barrymore on the cover.

Since the issue was being produced in the midst of COVID-19 lockdowns, there wasn't a typical cover photoshoot with a big camera crew.

“This cover shoot was certainly different, but I am so proud of what we created during this moment in time,” Drew wrote on Instagram. “I photographed myself at home. Pulled out some of my favorite t-shirts. Turned on my go-to playlist. Did my own hair and makeup…all while dancing in the mirror with my daughters, which is always the most fun way to get ready!! What a moment I will never forget.”

What no one realized was the impact her tee would have in a time where people were desperate for some good news.

The shirt Drew pulled from her closet for the cover wasn't one with a designer label. Rather, it was a vintage tee from the early 1980s, imprinted with “The Detroit News – The first good news of the day,” that she bought off Etsy. 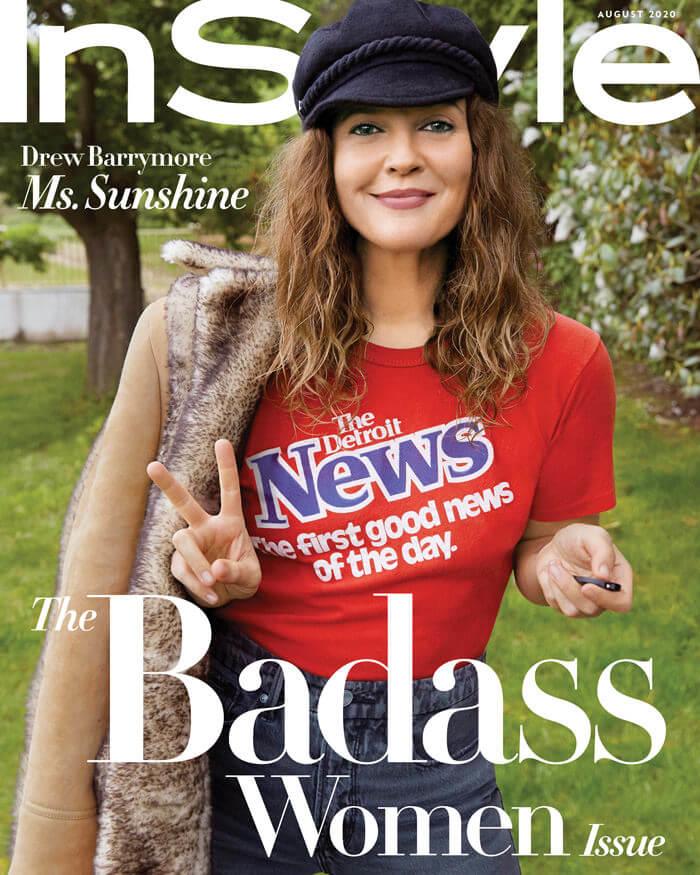 She says in the InStyle article that the photo of her with a smile, a peace sign and a shirt that says “good news” makes her feel like she's on the right path.

The positivity of the photo resonated with Drew's fan base, topping 13 million on Instagram, who began asking where they could get a t-shirt like hers. Calls started coming in to The Detroit News.

“The minute the photo of Drew appeared on the InStyle Instagram page, I got a call from someone who saw it,” explains Aimie Rosner, marketing director at The Detroit News. “That shirt was given out to the staff in the early '80s, and we hadn't seen it since. We were very surprised and had no idea Drew would be wearing it!”

Once the initial shock wore off, Aimie got to work. “Two minutes in, I called Val [Valerie Hayman Sklar, president of Corporate Specialties],” she says. “This began the big scramble to recreate the shirt and figure out how we could sell it. We had to move quickly, as timing was everything. Val and her team jumped into action and made everything happen for us.”

Once the decision was made to remake the retro tee, the next issue was selling it. But rather than profiting from the t-shirts, The Detroit News had a better idea: All proceeds would be donated to the Rosa Parks Scholarship Foundation, which was founded by The Detroit News and Detroit Public Schools in 1980.

“We always try to add a charity element into our projects to give back, and the Rosa Parks Scholarship Foundation was the first organization that came to mind,” Aimie says. “We're all looking for positive messages at this uncertain time in our country, so choosing this Foundation is very timely given current events.”

Building An Online Storefront In One Day

After Valerie received the call from Aimie, she immediately began to secure inventory, coordinate with her screen printer and prep the e-store.

The easy part was the technical side of the store, as Valerie has access to an online company store platform that can build a shopping site in minutes. The challenge came from finding the t-shirt inventory in the midst of the coronavirus lockdowns.

“Because of the supply chain disruptions, t-shirt suppliers didn't have warehouses full of inventory,” Valerie explains. “Ultimately, I used four different vendors to get the stock needed to fulfill the orders.”

While Valerie was tracking down the garments, the folks at The Detroit News got busy recreating the artwork for the shirt imprint. 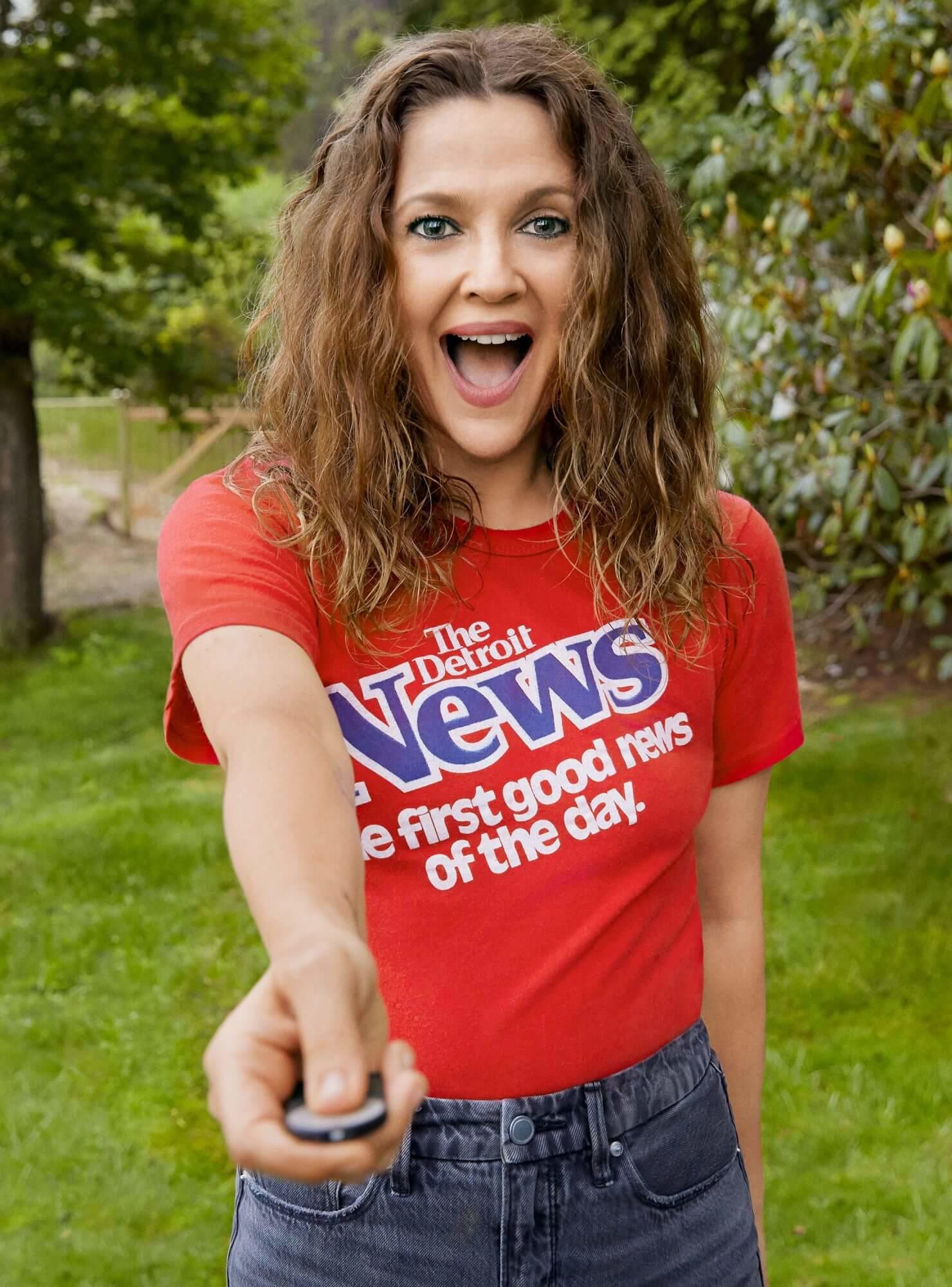 “Since there wasn't a sample of the shirt, The Detroit News art department had to recreate the design from the photo and try to color match,” Valerie says. “Working very closely with our screen-printing team, we did several iterations of the imprint to get the colors just right.”

By Friday, July 10, just two days after Drew's In Style cover hit newsstands, the Corporate Specialties team had a storefront up and running, ready to take orders.

“We really didn't know what to expect,” Valerie says. “We thought we might sell 100. To assess interest, we set up the store to sell shirts as a pre-order over a three-week timeframe. The benefit of a pre-order sales process allows us to make the exact number of shirts, in the exact sizes, to meet the demand without having a lot of excess inventory so that the maximum amount of funds could be donated to charity.”

Orders were coming in pretty steady, around 20 an hour. Then the unexpected happened.

Drew found out the shirts were being recreated with proceeds benefiting the Rosa Parks Scholarship Foundation, so she put out a quick video on Instagram so her fans could get shirts for themselves.

@detroitnews is re-making the vintage t-shirt I wore on the cover of @instylemagazine and donating all proceeds to the Rosa L. Parks Scholarship Foundation to support Detroit-area high school seniors as they head to college. Link in bio to get your own t-shirt and support this great cause!! ❤️

“All of a sudden, we jumped to getting 100 orders per hour for the next several days,” Valerie says. “It was thrilling…but also nerve-racking! We not only had to keep going back to our t-shirt suppliers to increase the quantity, but we also had to work very closely with our screen-printing team so they could also meet the increased demand.”

At the end of the pre-order period, an amazing 5,000 shirts were sold. While the screen-printing team could easily handle the quantity, things got a little tricky with fulfillment.

“Because of the social distancing requirements, packing and shipping 5,000 individual orders was more difficult than in normal circumstances,” Valerie explained. “Employees had to be more physically separated and work in shifts. It took a bit longer, but we were able to scale and meet the demand.”

Once the first pre-order was complete, there were still customers who wanted to buy shirts. A second pre-order campaign was done, followed by a third pre-order program.

In total, 5,500 shirts were sold and more than $70,000 was raised for the Rosa Parks Scholarship Foundation.

“Val worked night and day for a week to ensure that every customer was happy, and they got the size that they wanted,” Aimie says. “We can always count on her to get things done. We're always very impressed with how she goes above and beyond for her customers. Val is a Rockstar!”

As a part of InStyle's “Badass Women” issue, Drew talks about how she interprets being badass, growing up in Hollywood, raising daughters and the debut of The Drew Barrymore Show.

The show will begin with a “Drew's News” segment, a light-hearted human-interest segment that brings her version of good news to the forefront. It's fitting, then, The Detroit News tee aligned with the vision she was creating with her show.

In keeping with delivering the good news, Drew spoke about the t-shirt and the money that was raised for charity in the September 17, 2020 episode.

While the average company store doesn't turn this kind of profit, it does illustrate the power of celebrity and how aligning with a great cause can boost the message of a simple product like a t-shirt.

“Being involved with this kind of project is special because of the impact you get to make on so many people,” Valerie says. “Not only were t-shirt recipients delighted but being able to help students with their educational aspirations is very gratifying. Being based in Detroit is a huge part of our company culture; it's baked into our DNA. This project allowed us to combine our passion for promotional products with our love of Detroit. It's definitely one of the highlights of 2020.”

Interested in creating branded merchandise for your organization or opening a company store? Put our concierge service to work for you.

Contact us at hello@corporatespecialtes.com or book an appointment at https://meetings.hubspot.com/corpspec/chat-about-swag for a quick 10-minute chat, 20-minute new product call or 30-minute brainstorming session to get started today.